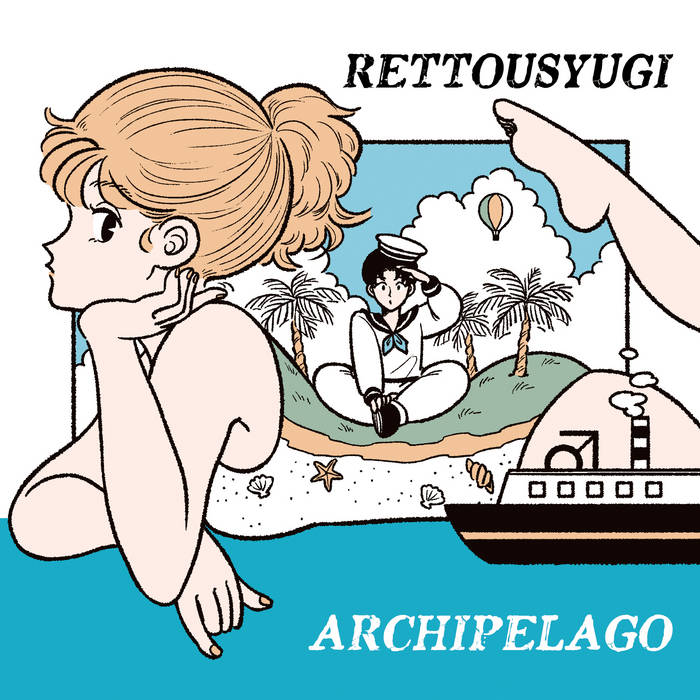 Archipelago were founded in Mexico City, December 2015 for a one-off track which spiralled into a mini-album (2016’s MMXVI) and now release their first full-length, 列島主義 (Rettoushugi, Archipelagoism).

Members are, in alphabetical order by surname, Andrés Claramunt Quiles (born 1969), a former Балетная труппа Большого театра (Russian Bolshoi Ballet) dancer who became a naturalised Spanish citizen in the 80s during the movida madrileña after fleeing the USSR (ask him to show you his scar sometime) then moved to Osaka in 2013, always in search of a more peaceful day-to-day life.

Shannon Victoria Leeman (born 1987) is daughter to the Irish consul for the Mexican state of Quintana Roo and graduated from the Escuela Superior de Música in Mexico City with a double specialism in opera and the four letter J-word.

The two met on site whilst working as stunt doubles/extras for the opening sequence of the James Bond film Spectre. Both members sing and play a lot of instruments, although one member is a considerably better singer than the other whilst the other rather has a longer attention span in terms of being able to stare at computer screens and punch keys.

Recording for Archipelagoism began in 2016 in Osaka – inauspicious beginnings, Andrés just needed a track to play out for a DJ set – but following gigs with Soichi Terada (first Japanese house producer ever, remixed by *the* Larry Levan, remixed Perfume before they were famous, did the Ape Escape soundtrack) and at Kyoto’s legendary Café La Siesta, he found a loving, nurturing family in the Kansai lo-fi house, breakcore and fashion scenes. This reignited a former on-off love affair with musique concrète (more ‘Everything counts’ than Merzbow) and UK rave culture (via Off Me Nut Records) so an e-mail and demos were sent to Shannon who showed her enthusiasm for the material and away-hey-hey we went.

Vocal recording and general engineering and mixing duties were overseen by Grammy Award-winning Gael Hedding (Metheny, Timberlake, Spears et al) in Cancún. The album itself was recorded in Osaka, Liverpool, Lisbon, Cancún and – drum roll please because this last one’s the most exotic of them all – Alabama.

In the very short-term future the duo will be heading to Japan to present their new record in the summer followed by a return to Mexico in the autumn for a few select dates and to work on leftover material for additional single/EP releases towards the end of the year. In the meantime if you’re after music recommendations Savage Garden’s self-titled début album is a really good pop album if you’ve never heard it. As is 水曜日のカンパネラ’s (best copy and paste that) Superman. Also try to find a torrent of Prince’s vault recordings, they’ll blow your mind.

The album’s a good one to dance around your flat (or elsewhere) to in your underpants getting all hot and sweaty, so look forward to it.

Disclaimer: some statements contained within this press release are patently untrue or are subject to opinion but as patently untrue statements and highly biased opinions are en vogue these days (if they were ever hors vogue), we thought we’d shamelessly jump on the bandwagon.

All tracks composed and produced by Andrés Claramunt Quiles for Lorenzo Music.

Illustrations by San Lemo.
Inlay and design by Jack Leeson.
Lyrics translated into Japanese by 高橋秀和 and Andrés Claramunt Quiles.

All rights reserved, all lefts reversed, all wrongs severed.

Andrés would like to thank: Beat Sampras and Chris Baseline, all of the Bentleys, mum and dad and brother and sister, Joanna et al for the muffler, Shannon and the Leeman Suásteguis, Gael, Joyce, Makoto, Hiroko, Takahashi-sensei, all at GE Japan, Master Kouta, Zig, NC4K crew, Siesta crew, MIDISAI/Japan Invasion crew, Ponkichi for letting us do the album release party at Ohnoya, everyone who played the release party, everyone in Kyoto and Osaka basically, David, Sílvia. San Lemo for the brilliant illustrations, Jack for piecing everything together and Mark & Ady at AnalogueTrash for the label support. Everyone I’ve met over the past two years. Big pharma for the diazepam. And if I’ve forgotten anyone my apologies, like everything this was done in a mad dash to pre-empt a deadline and that’s no way to do things. I know and I’m sorry.

No thanks to: me, myself, my body.

Bandcamp Daily  your guide to the world of Bandcamp

Guest hosted by Tamar Osbourn aka Collocutor and Toshio Matsuura.